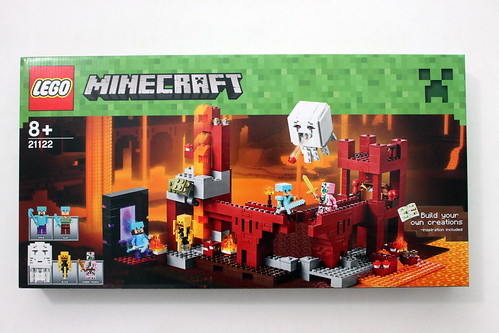 This is my second review for the 2015 LEGO Minecraft sets. The Nether Fortress (21122).This is the biggest set in the wave. The set contains 571 pieces and will go on sale August 1. It retails at $79.99. To review this set, the LEGO CEE Team provided it.

The LEGO Minecraft border is at the top of the box, and below you will find the artwork from The Nether Fortress. This design was similar to my review of The Snow Hideout (21212) Closeups of each set detail and instructions on how to make the alterate are included in the instructions. This box contains six bags, each numbered 1 through 3. Three loose plates are also included in the box, as well as an instruction booklet. 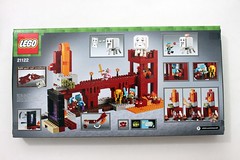 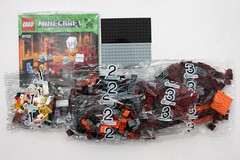 It includes three miniaturefigures along with a few mobs that can be built: Alex, Steve (the Zombie Pigman), and Blaze.

Steve is the same minifigure that we’ve seen in many previous sets with the blue torso and purple legs. Additionally, he has a diamond helmet with diamond chestplate as well as an diamond pickaxe. His appearance isn’t anything extraordinary. 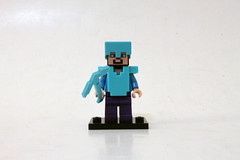 Alex is Steve’s alternate default skin. It’s a light green with brown legs. On her body and on her head, she has pixilated prints. The helmet she wears is tassel-shaped and has a diamond crown, but it does not include a collar. Alex has access to a diamond sword she can use against mobs in the fortress. 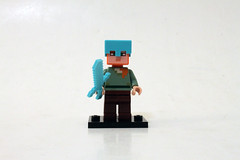 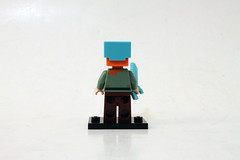 The LEGO Minecraft sets’ Zombie Pigman minifigure is the most detailed. It is pink in color and has printing that looks like rotting flesh and bones. The accessory includes a golden sword. This is the only set to contain this particular minifigure so if you want an army of them, it’ll probably get pretty expensive. 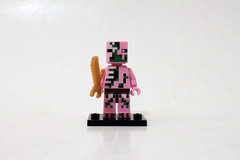 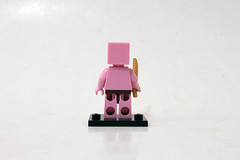 The Blaze is a mob that’s only found in The Nether Fortress. It is created with two modified 1×1 bricks with studs on 4 sides, aka the Travis Brick, with yellow nozzles in each stud. The detailed printing shows it burning. 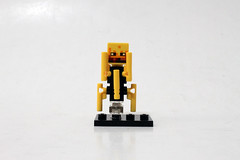 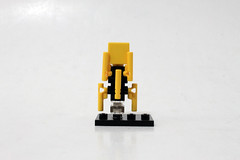 The final is the Ghast. It’s a mob of brick-built mobs made mostly from tiles. A stud shooter is inside the Ghast, and it shoots fireballs out of its mouth. What’s unique about this mob is that there different printed 2×4 tiles to change out the Ghast’s face, which by the way looks very accurate to the game. The bottom of the Ghast has eight tentacles made of 1×2 plate with clip. The Ghast has actually nine tentacles in the game. 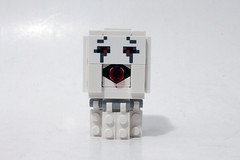 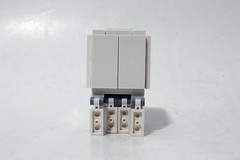 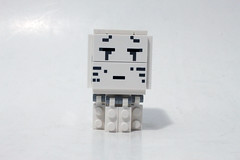 Minecraft veterans will quickly recognize the Nether Fortress, a massive structure. On the left side, you have the Nether Portal which uses a nice trans-purple window panel piece that was used in only one other set, the Ultra Agents AntiMatter’s Portal Hideout (70172). 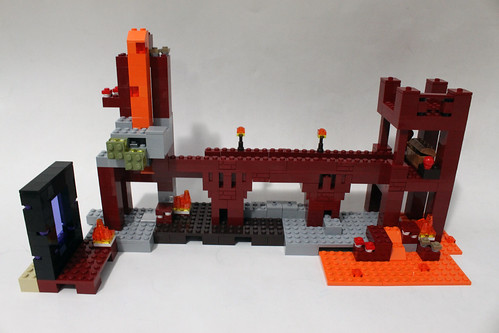 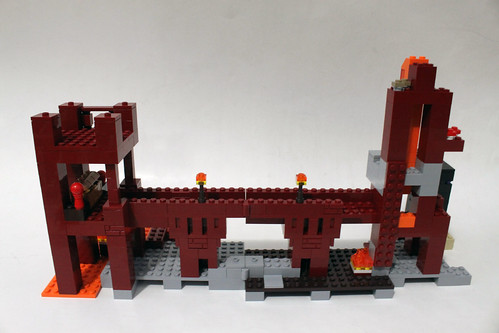 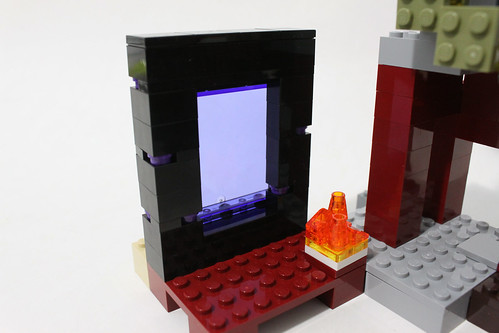 Adjacent to the portal is a lava waterfall that is made mostly of orange 2×2 bricks with some 1×1 trans-orange bricks here and there. The lava can be made by pulling on a Glowstone brick that is on the mountain’s side. 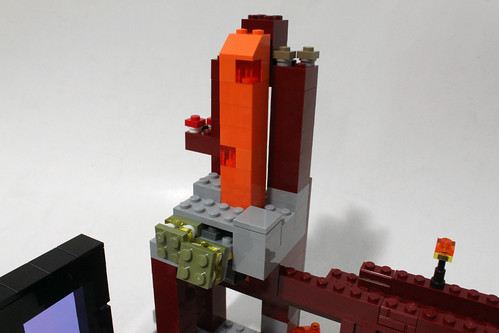 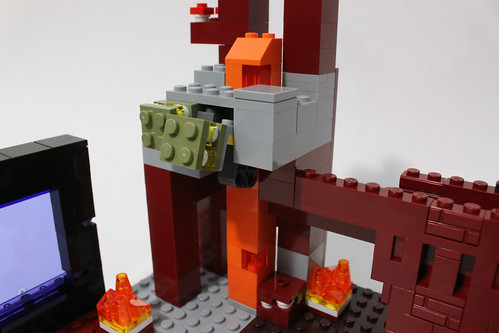 As you progress to the right of the Nether Fortress, there is a bridge walkway up top and at the end of the tower, there’s a chest filled with treasure waiting for Steve and Alex including a golden sword and a couple of diamonds. 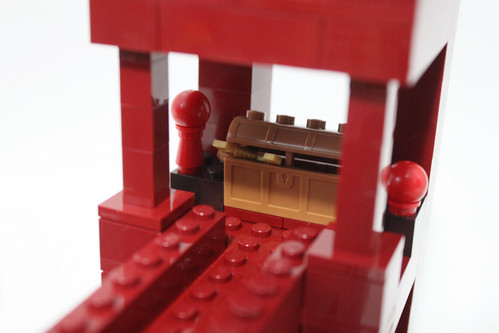 About halfway through, there are a few hinges which allow you to easily fold the set into itself. “L”You have the option to give your project a completely different appearance by choosing the /right angle form, depending on what you prefer. 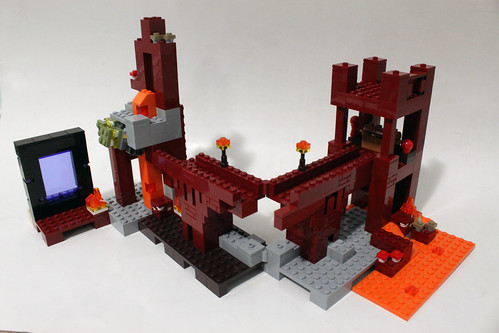 You’ll notice throughout the set that there are decorative builds such as Nether warts, Nether quartz, and mushrooms to give the set some video game authenticity. You can also see some 2×2 plates with jumpers in various places where you can put those elements. 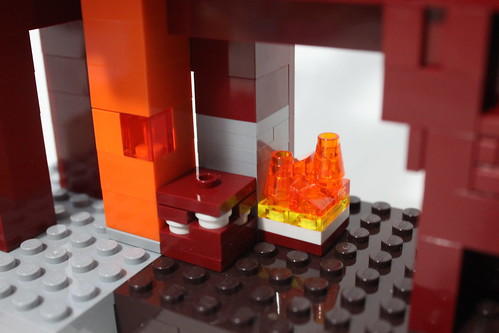 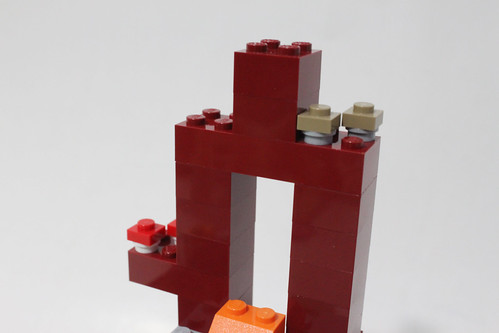 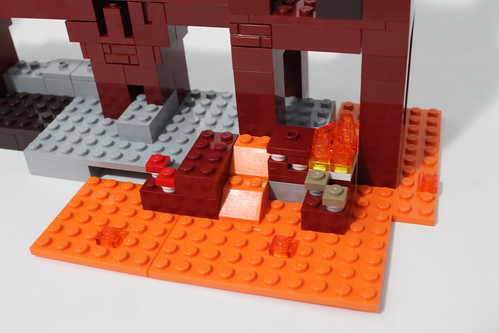 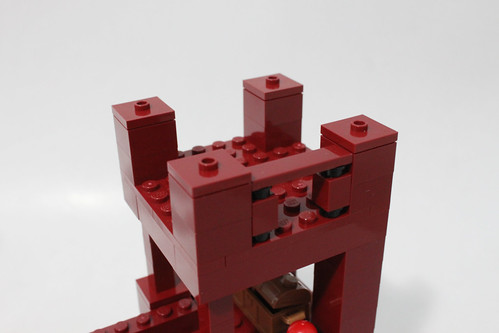 The set is decent and would appeal to Minecraft lovers. You can use some of the useful features and elements in this set to make other builds. These elements, including the minifigures and mob build, are outstanding and perhaps the most impressive part of the set. Unfortunately, it might be hard to obtain what you truly want due to the $79.99 cost. Blazespawner was one of the things I considered a wonderful addition to this set. You can’t really have a Blaze without the spawner, right? 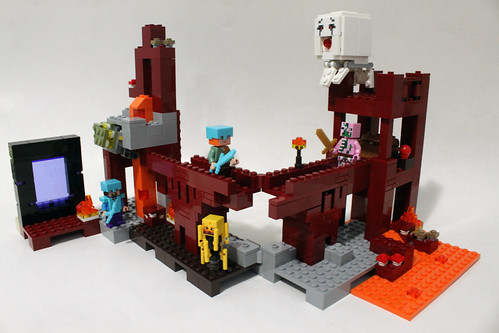 It’s a great set that has a lot of red bricks. It’s just a little too expensive for 571 pieces. If you can get it at a discounted price in the future, it’s worth picking up. Will any of you be picking up this set when it’s available next week?