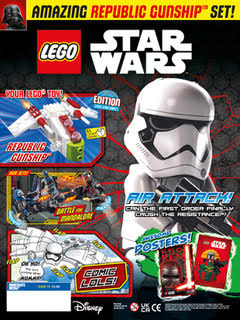 Issue 78 LEGO Star Wars Magazine is out now in the wild, and here’s all the details of what you’ll find inside – and on the outside – of the cover.

This issue features hilarious comics by two other comedians. In the first, Kylo Ren attempts to form a new flying squad, much to the Resistance’s amusement! The second comic offers the Clone Troopers’ take on the classic Trojan Horse tale!

This and many other details can be found in the official LEGO Star Wars Magazine – out now!