Following rumours that next year will finally bring us a UCS version of Luke’s Landspeeder, here’s a full rundown of every single LEGO Star Wars version of the set that just won’t quit.

Apparently up there with X-wings, TIE Fighters and Snowspeeders for legendary status in the Star Wars universe – despite only appearing towards the beginning of Star Wars: A New Hope – Luke Skywalker’s X-34 Landspeeder has been a mainstay in the LEGO portfolio since 1999.

LEGO X-34 Landspeeder, the first LEGO X-34 Landspeeder, was part of the earliest LEGO wave. Star Wars sets that debuted in 1999 alongside The Phantom Menace, and for five years, 7110 Landspeeder – which includes minifigures of Luke Skywalker and Ben Kenobi – would remain the definitive LEGO version of the vehicle. It’s very dated by today’s standards, but has that retro charm about it.

The LEGO Group’s first take on this wretched hive of scum and villainy saw a huge chunk of its 193 pieces devoted to (for some reason) a new version of Luke’s Landspeeder at minifigure scale. Designers decided on sand rather than tan for the base colour. The single-piece engine and inaccurate windshield were still present. 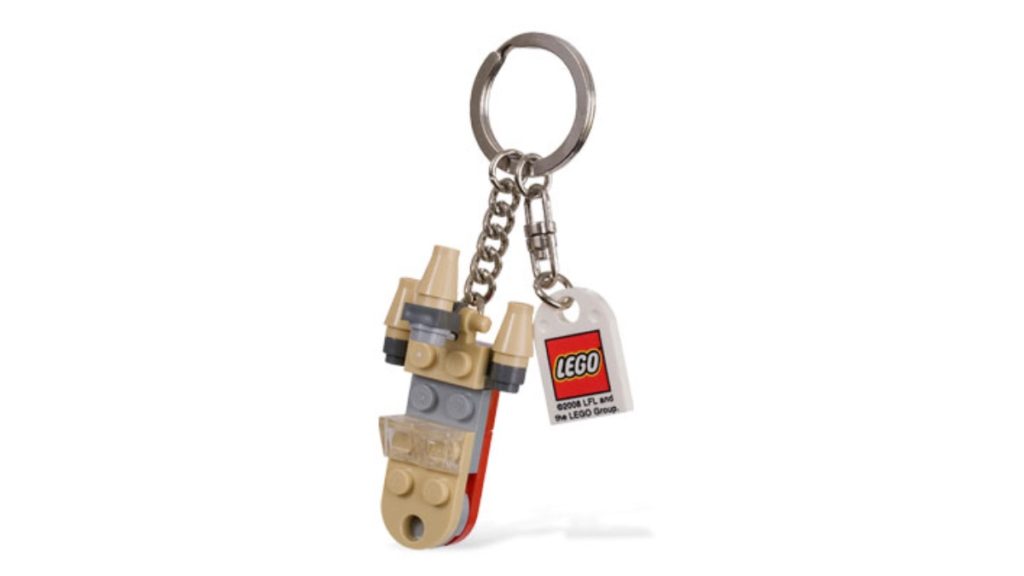 One of the earliest LEGO bag charms – essentially oversized keyrings – tackled the Landspeeder, because this is clearly a vehicle iconic enough to carry around with you. It was also the first miniature version of the speeder, but it wouldn’t be the last. 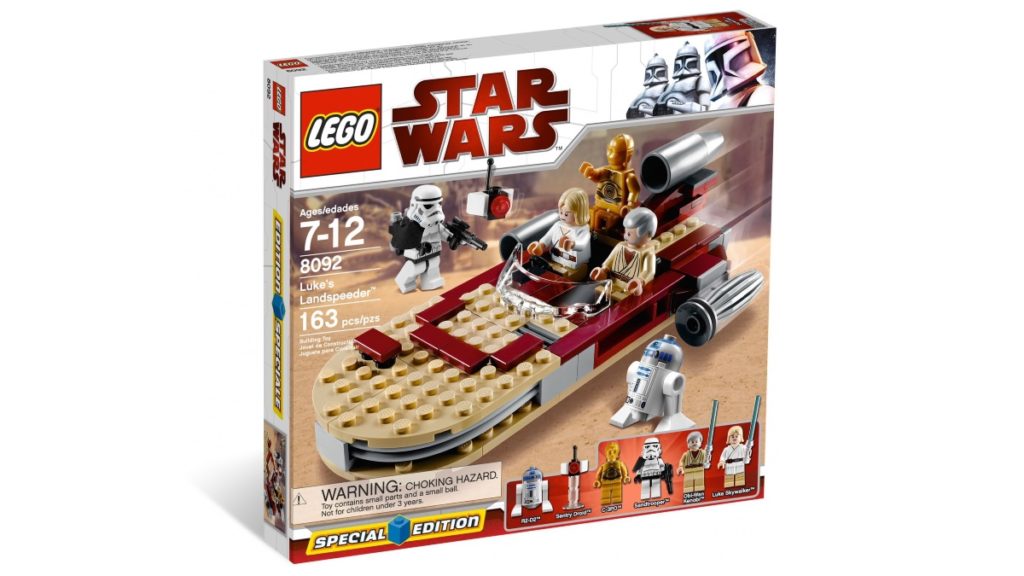 Reverting back to tan for the last time at this scale, 8092 Luke’s Landspeeder focuses on A New Hope’s ‘these aren’t the droids you’re looking for’ scene in its minifigure selection, which expands on 7110 Landspeeder with C-3PO, R2-D2 and a Sandtrooper. It was also first Landspeeder to use the Speed Racer theme’s curved windscreen. 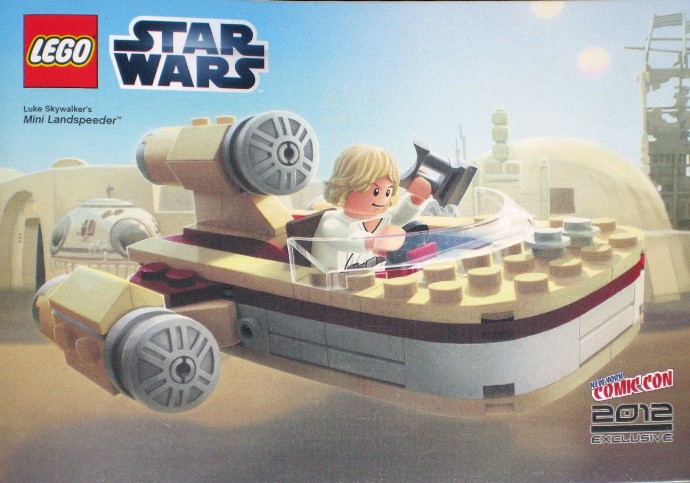 Probably the most adorable version of Luke’s Landspeeder to date – and a good idea of what the eventual Microfighter model will look like, because you know it’s going to happen one day – this convention-exclusive set was handed out to the first 200 people to show up at the LEGO stand at New York Comic-Con in 2012. It’s very expensive now. 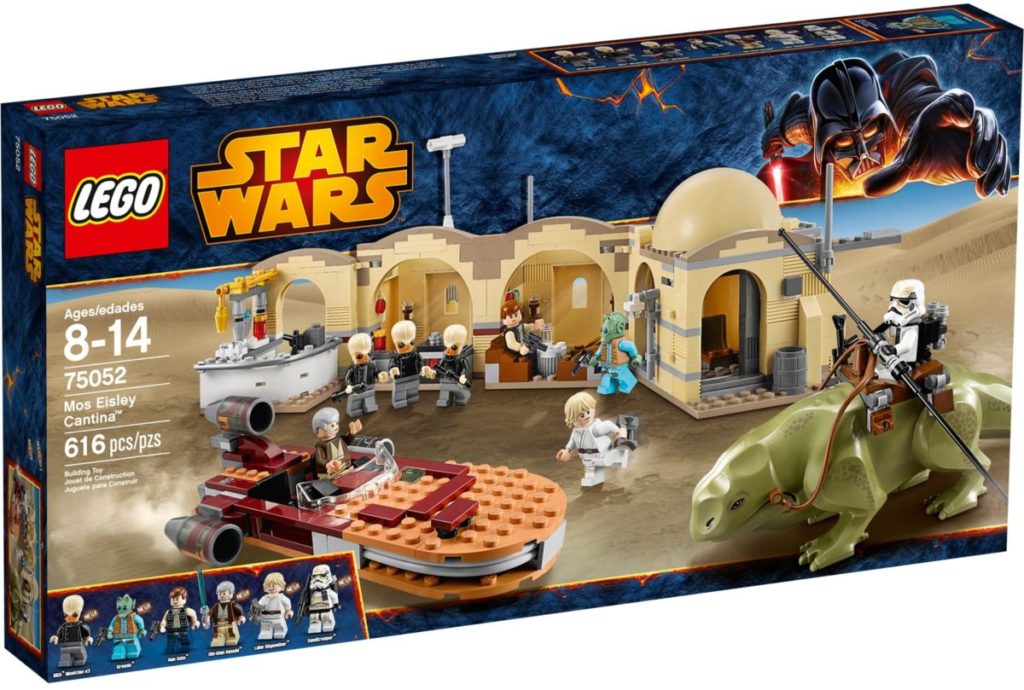 A second take on Mos Eisley and another Landspeeder. (We thankfully avoided the same pattern in last year’s 75290 Mos Eisley CantinaThis leads to several other, more obscure speeders. Because it used nougat as a base color, this one is often used to create the templates for many X-34 Landspeeders. Its tube design also reappears further down this list… 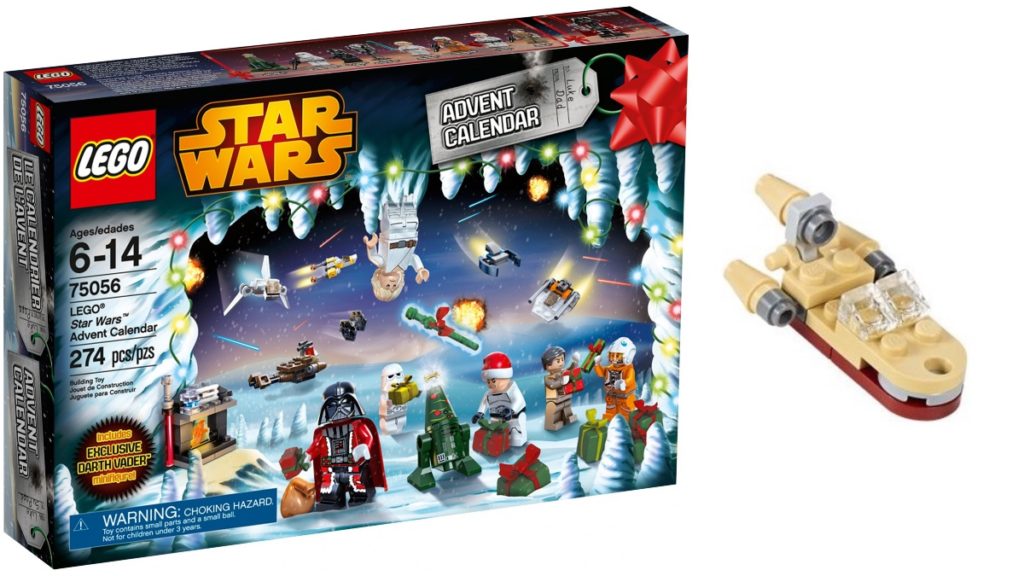 The LEGO Group essentially just removed 852245 Landspeeder Bag Charm from its chain for 2014’s Advent calendarYou will need to swap out the red base plate for one made in dark red. Not incredibly inspired, but then if it ain’t broke…

Technically two different sets by virtue of including either a C-3PO or R2-D2 minifigure – and technically, therefore, two more Landspeeders – these convention exclusives both include another mini version of Luke’s speeder. The bag charm includes a 3-plate-high farmerboy. 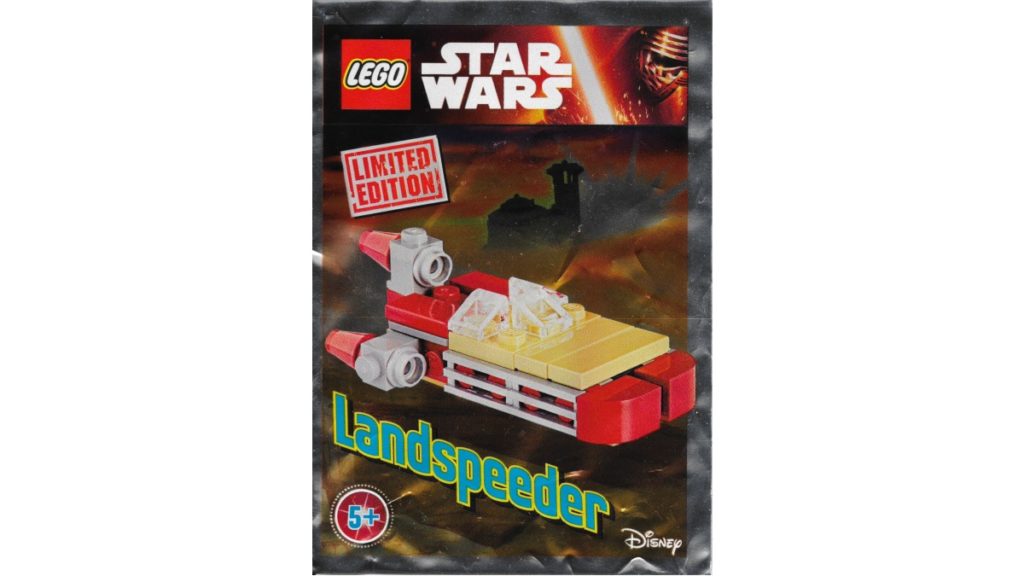 A bigger and wildly different take on a mini X-34 Landspeeder than any that had come before it, this questionably-bright-red model was bundled in as a foil-bagged freebie with the official LEGO Star Wars magazineIn 2016. In 2016, 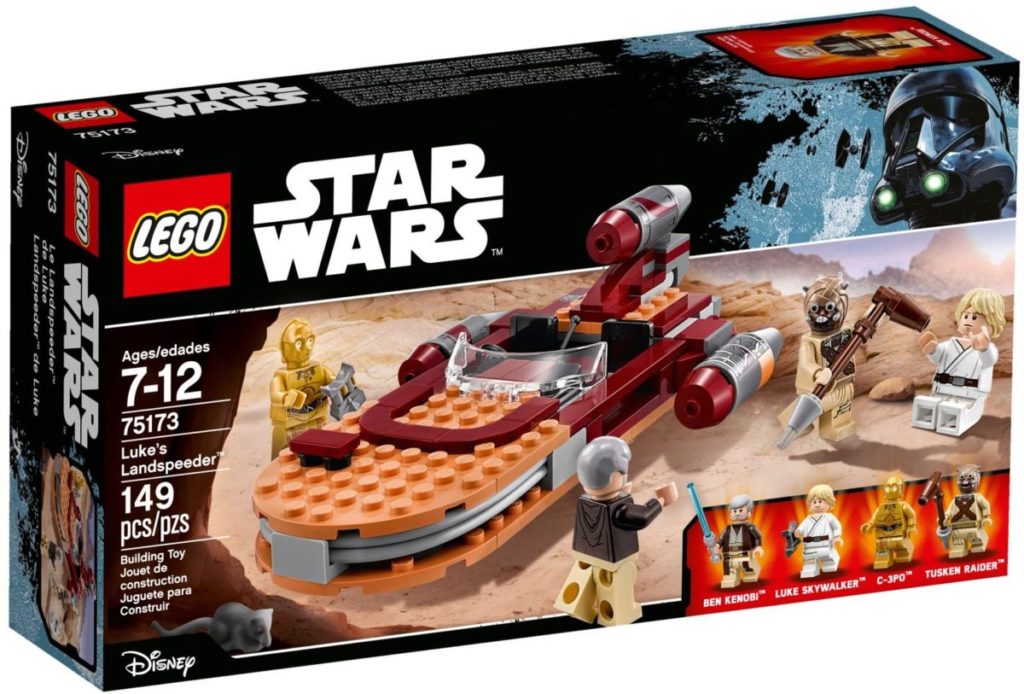 We’re back in solo set territory now, with a model based on the X-34’s adventures with Luke and the Sand People. (Such a versatile set when it comes to minifigure selection – we’re starting to see why the LEGO GroupThis vehicle is a favorite of so many. For all intents and purposes, this is effectively the same version of the vehicle that was included in 2014’s 75052 Mos Eisley Cantina. 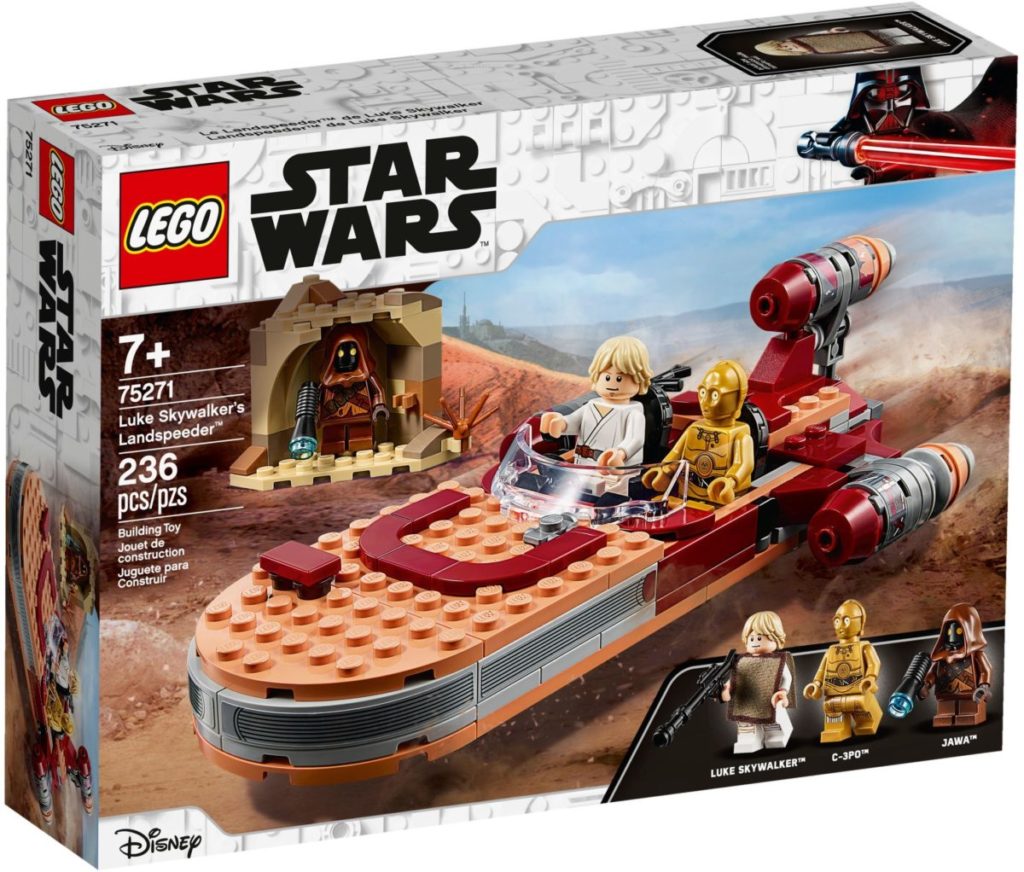 The last Landspeeder disappeared from the shelves one year ago. LEGO GroupThe second one was made, substituting the Tusken Raider in favor of a Jawa. Stickered bricks were used to replace both the tube designs of minifigure-scale Landspeeders. These bricks have detailed plans for engines and seats. However, the final result was identical: another year, yet another Landspeeder. 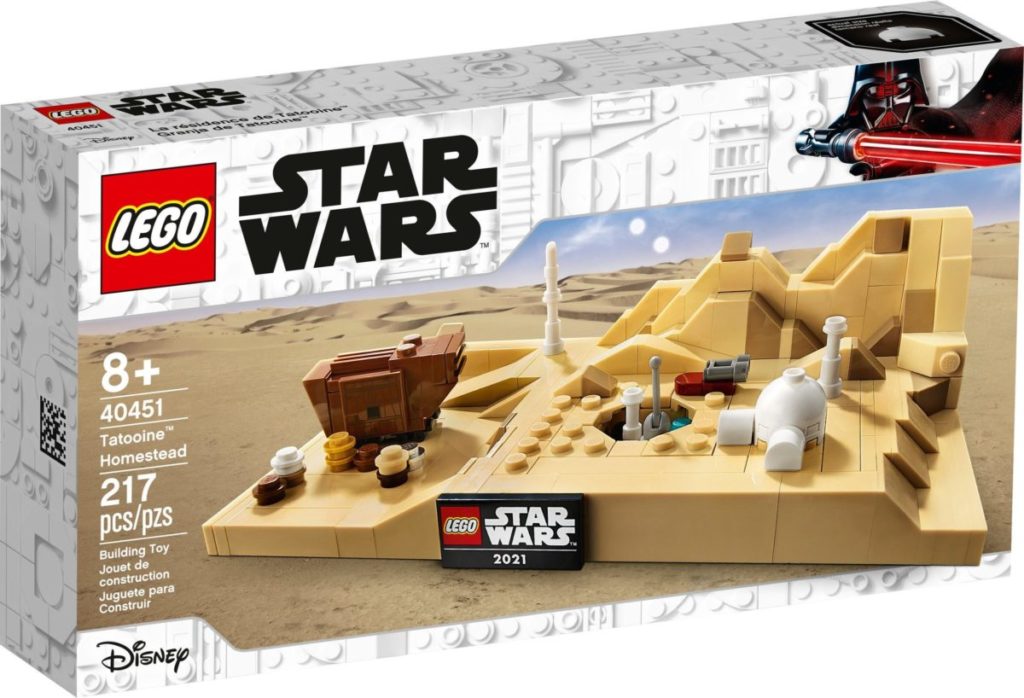 The LEGO Group loves Tatooine almost as much as it loves Landspeeders, which is handy given that’s exactly where Luke’s X-34 shows up. And it also means we had the first microscale version of the vehicle in this year’s May the Fourth promo, 40451 Tatooine Homestead, which impressively rebuilt the speeder using just three pieces. 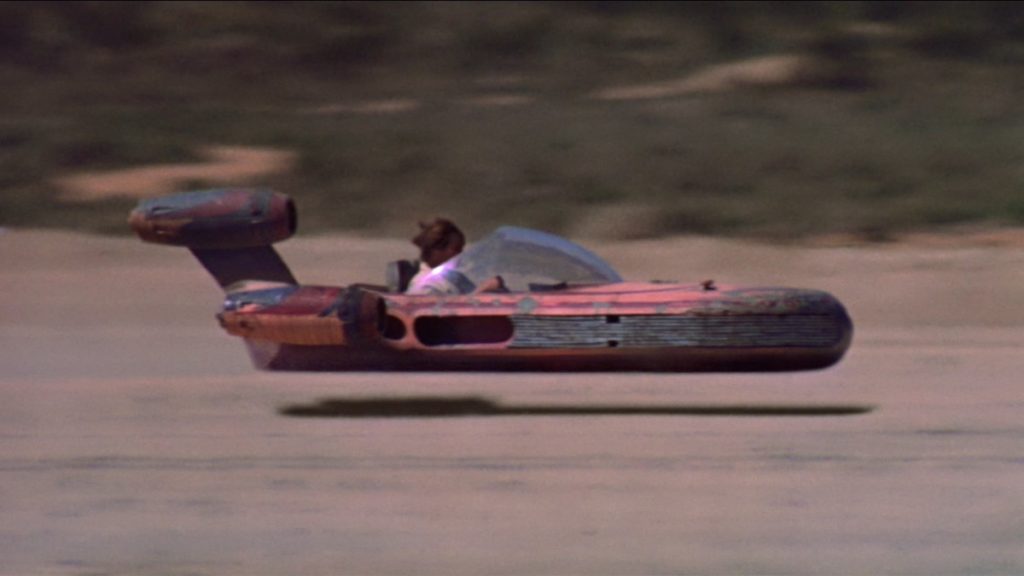 75271 Luke Skywalker’s Landspeeder is set to retire by the end of 2021, but according to the latest rumours, we won’t have long to wait until the next one arrives to replace it – even if it is the first at UCS scale. Be careful what you joke about next, is all we’ll say…

There are too many LEGO Star Wars Luke’s Landspeeders